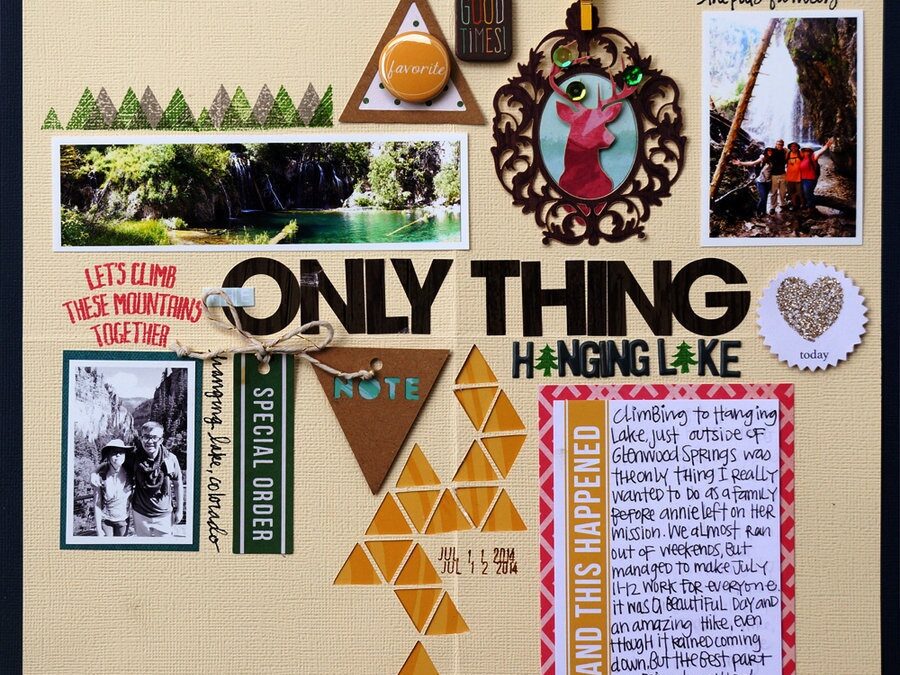 Can you follow five rules? It’ll be more challenging than you think.

Greetings all! My Designer’s Challenge for you this month was major randomness tossed together and sprinkled with a bit of whimsy, I think the Design Team thought I was crazy when I posted the challenge. I was just in a goofy mood, and wanted to try something different.

One of my all-time favorite designers, Jenn Olson, once did a page where she folded the background cardstock. I loved the lines it created in her design, so that’s what started the first part of my challenge. Then I just started to make requirements up. And it was such a freeing experience to create a layout based on these five rules. So I hope you’ll join me this month in just having fun and playing. Here are your rules:

1. FOLD YOUR BACKGROUND PAPER IN HALF, UNFOLD, THEN FOLD IN HALF THE OTHER WAY, SO YOU HAVE FOUR EQUAL QUARTERS ON YOUR BACKGROUND (this may be hard to do, and you probably won’t really see it, but it gave me a different starting point and it was interesting).

2. NOW MAKE THE FOLD A PART OF YOUR DESIGN BY HAVING YOUR TITLE SIT ON ONE OF THE FOLD LINES.

3. MAKE SURE YOU FRAME SOMETHING ON THE PAGE.

and 5. USE BOTH THE A AND B SIDES OF AT LEAST THREE DIFFERENT PATTERNED PAPERS.

This challenge really made me step outside my design comfort zone, but I loved the end result. It forced me to do things that I normally don’t do while designing. I smiled more than once while putting things on the page. Especially when I framed the deer head, I knew Jody would be proud. She even mentioned in the DT thread that this looked like a page she would have designed. That was a huge compliment! Here’s my take on my challenge:

1. A folded background, you can’t really see it, but it did give me starting point for part 2.
2. Have your title sit on a fold. This was something very different for me. My title usually is added toward the end of my design process, so working around it from the beginning was unusual.
3. My deer head with sparkles on the antlers, just because it made me smile.
4. My bow has knots on each ending, I like a clean looking piece of twine.
5. A and B sides. I tried really hard to do this, but when I looked at the final product, I realized I hadn’t quite met the challenge. I used a good amount of patterned papers, but not three, both sides. So I’ll be lenient on that for you. 🙂 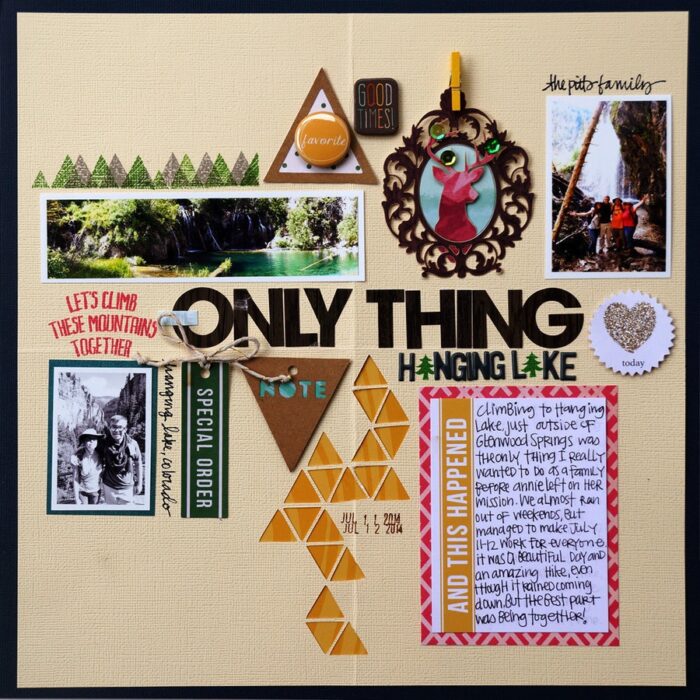 Lisa admitted that I confused her, but she ended up having fun with her creating. I love how she took the same rules and made a layout that while outside her comfort zone, is very true to her style. She said, “You did stump me though. I left it on my screen and walked away to carry on working. I kept coming back to reread it and each time came up with a new idea.
I ended up pushing work to one side to work on this and then it came in the car when we went out later so I could sew on it.
One of those that I didn’t want to stop working on

– I stitched along my folds to make them part of the design element.
– My title sits on and below one of the fold lines ‘He Said’.
– I used a chipboard frame from the ‘Crabtree Falls’ addon.
– I used the ribbon from the main kit to tie 2 knots.
– I used 3 pieces of patterned papers (both sides) The blue and yellow hearts are from 1 piece, the stars and ‘we all have a story to tell’ another piece and ‘a handmade craft’ and the small dots with green dots were from another.” 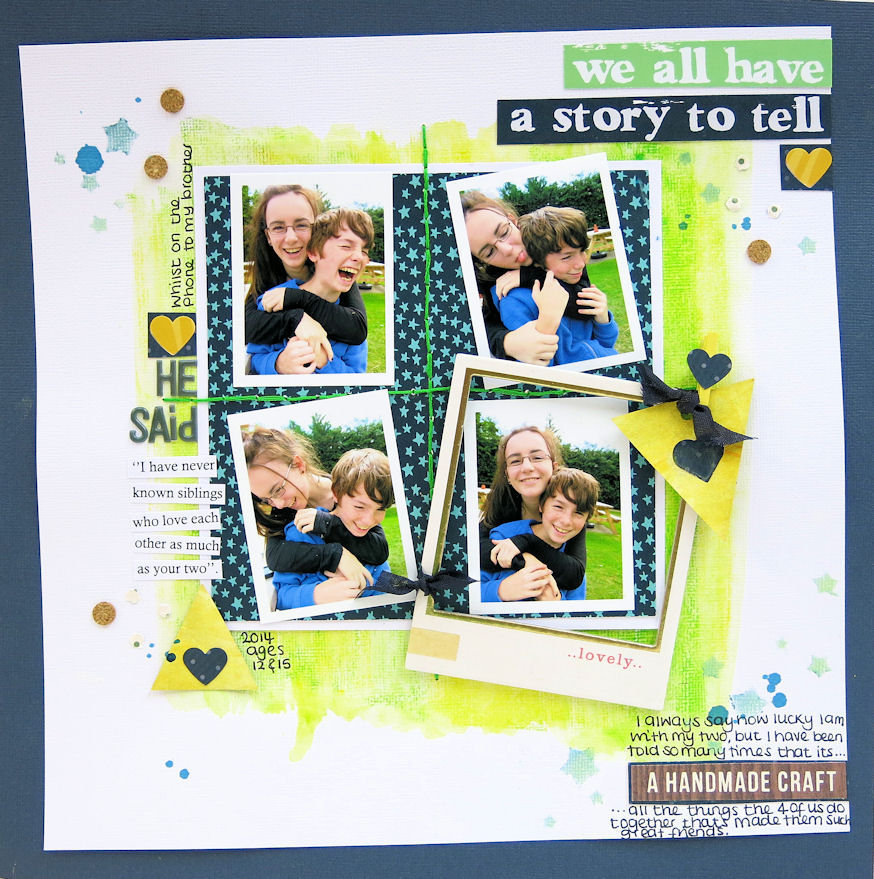 Here’s Nicole’s beautiful take on the challenge. I love how this is true to Nicole’s amazing abilities with patterned papers (I always love how she combines them so gracefully), but you can see she stepped a little outside her own comfort zone with the four grids. It worked so well, don’t you think? About the rules, she said, “At first, I thought you were on something when you came up with the challenge.. lol, but I like the page in the end! Thanks for trying to stump me.

* I didn’t physically fold it, but i did divide into 4 grids, then used that line to line up all my elements.
* title on fold
* framed photo with lots of layers
* knotted twine around flair piece
* lots of paper pieces – sure there are more than three using both sides. 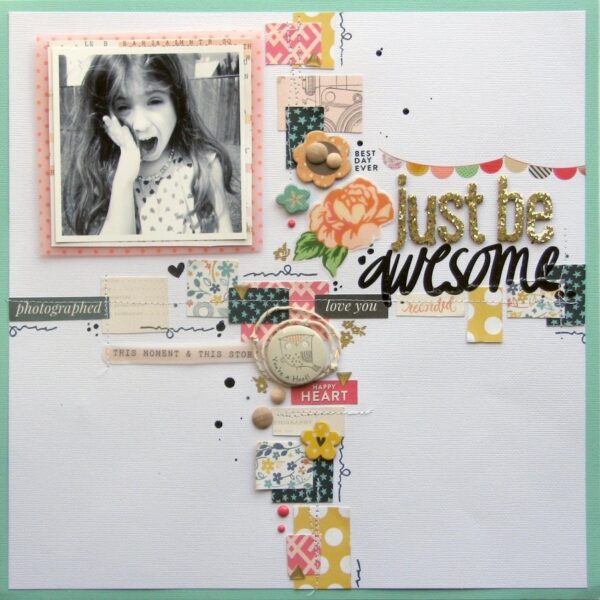 Finally Sharmaine played along and I think she created one of my top five favorite Sharmaine layouts because of it! She has such a fun playful style, so mixing these crazy rules in with that just made me smile. I could help that her pictures are pretty funny too 🙂 Here’s what Sharmaine said about the challenge:

* I’ve been wanting to try the “creased paper look” for a while, thanks for the inspiration to create!!
* My title doesn’t sit on the fold line (I wrote it down as both sides of a fold oops). So my title is top and bottom.
* I framed the flair (and pop dotted heart) with a wood veneer camera.
* My knots are doodled ones, around some of the circles on the pattern paper.
* I used 3 papers on my page. The background paper I tore so you can see both sides. I used the exclusive Cocoa Daisy paper (stars behind the photo and the other side is the title). I cut up, and used both sides of the Maggie Holmes paper (found in the paper add on). 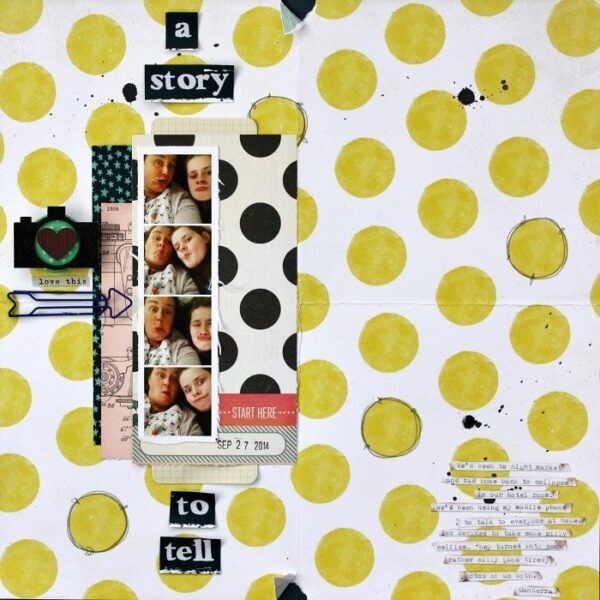 I loved how the team took this challenge and made it work for them, so many brilliant little touches. Lisa’s stitching, Nicole’s framing, and Sharmaine’s ripping the paper to show both sides? We’ve got a crazy talented bunch of ladies here at Cocoa Daisy, and not just on the DT! So I hope you’ll join us, it’ll stretch you, but you’ll have fun, like we did. You’ve got two weeks, the challenge will close on the 28th of October at 11:59 PM ET. Start creating, I’ll announce a winner on the 30th.

Planner Love at First Sight!
How many things can you spy in our November Weathervane sneak peak?