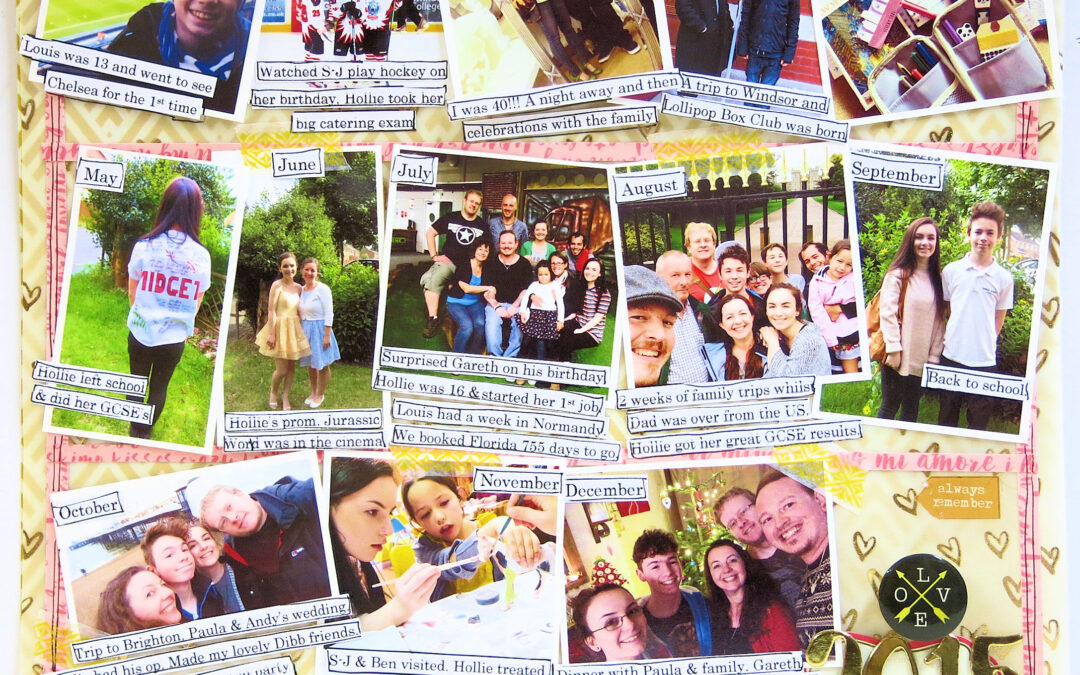 Farewell 2015….how to end your years scrapbook

Today I am bidding farewell to 2015 and closing up my 2015 scrapbook album.

I keep lots of scrapbook albums. The kids have one each, one for each big vacation that we take, the Project Life album and each new year has it’s own album too. At the end of each of the years albums I like to end with a final LO which is a review of the whole year. I just think it’s a really good way to close the year and the book too. It gives the scrapbook album a proper ending.

Today I am sharing with you how my 2015 review page was made.

It can be tricky creating a LO with multi photos. So getting at least 12 photos on the one 12×12 page with a title, journaling and yet still keeping some kind of a design can be a challenge. 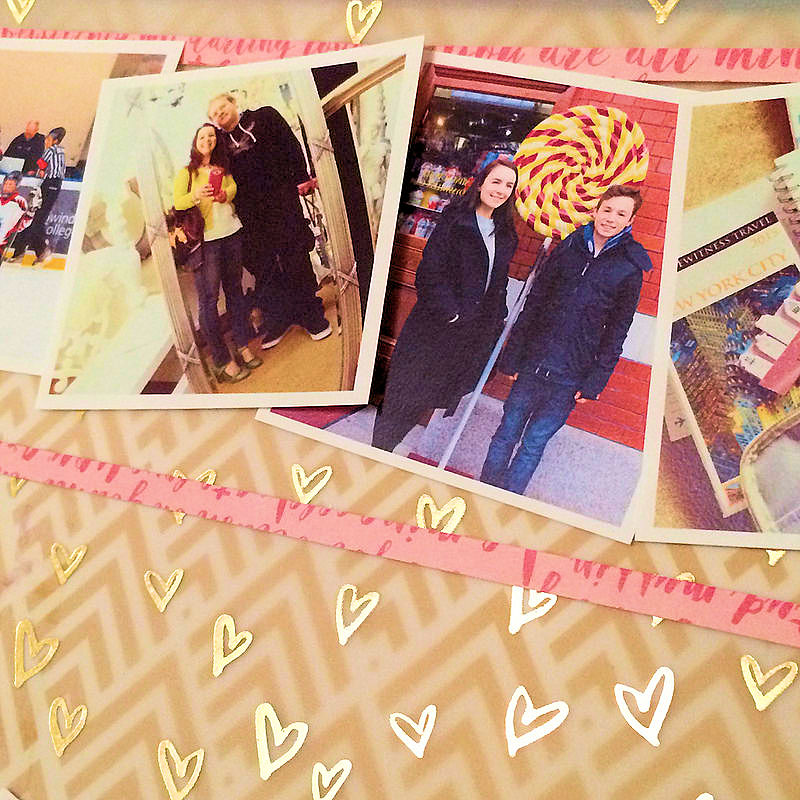 I keep all my photos files organised throughout the year. This makes my life so much easier when it comes to scrapbooking. There is a new file for each year, then monthly files within that. Then within those monthly files there are more files for the days where I have taken photos and they are all labeled too so I know exactly what day they were taken and the reason…birthday/school event etc…

So to go through the years photos and pick one out for each month, doesn’t feel a task. I also write down notes at the same time of events that have happened each month. This makes it easy when it comes to the journaling.

I wanted a patterned background, but not something too busy. I took a 12×12 from the Main January Kit and also the pretty heart vellum from the patterned paper addon. This mutes the patterns on the paper beneath and tones it down nicely. I also used the pretty pink 12×12 paper from the same paper addon to create a frame for my LO and strips across my LO to attach the photos to. It adds more colour and interest to the page rather than just sticking the photos down. It’s difficult to add too much design to a LO when there are so many photos, so a frame is a good place to add some decoration. 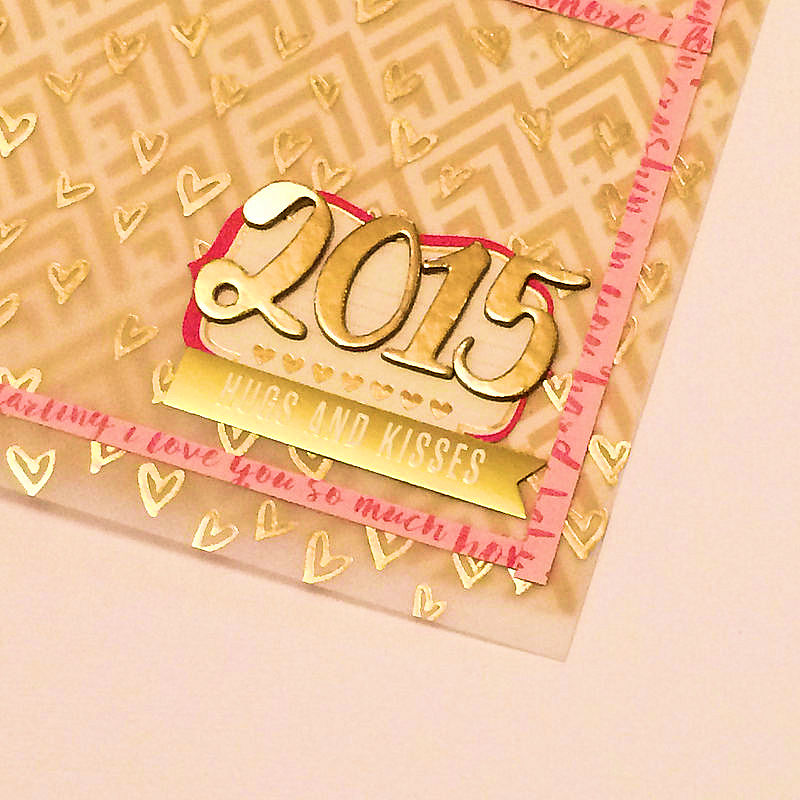 I trimmed down the edges of the 12×12 patterned paper so that the vellum hung over the edges, showing the vellum and that it’s not part of the background paper. I also created my title work at this point. I wanted to make sure that enough space was left and that it was a squeezed in job at the end. I used the stickers and the chipboard alphas from the main kit here. 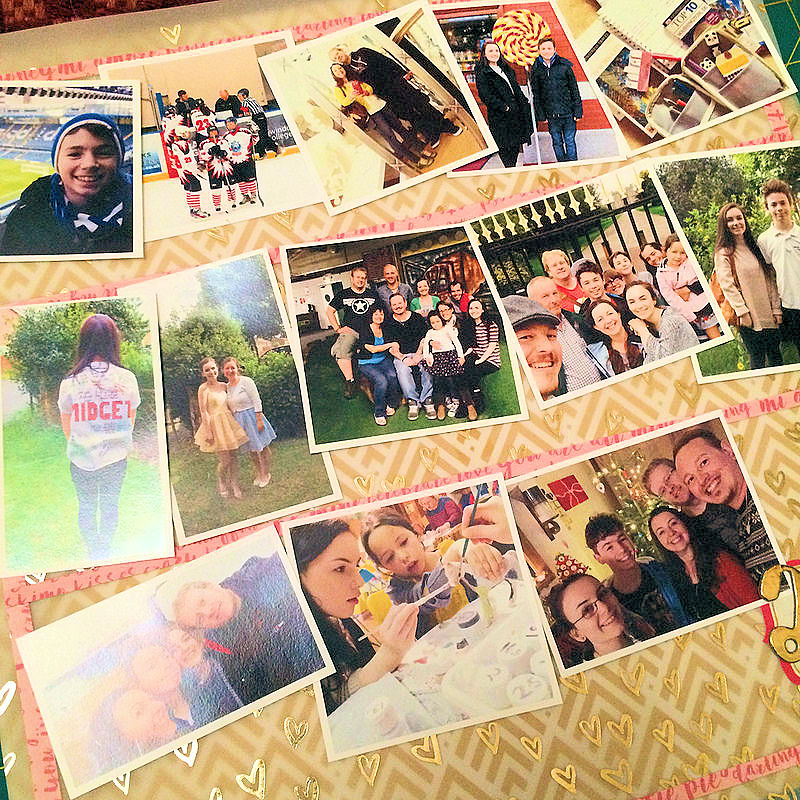 I worked out where all my photos would go before sticking them down. trimming the photos with a good white border helps them to stand out on the LO. That’s so important when there are so many photos on the one LO. Otherwise they just blend in. 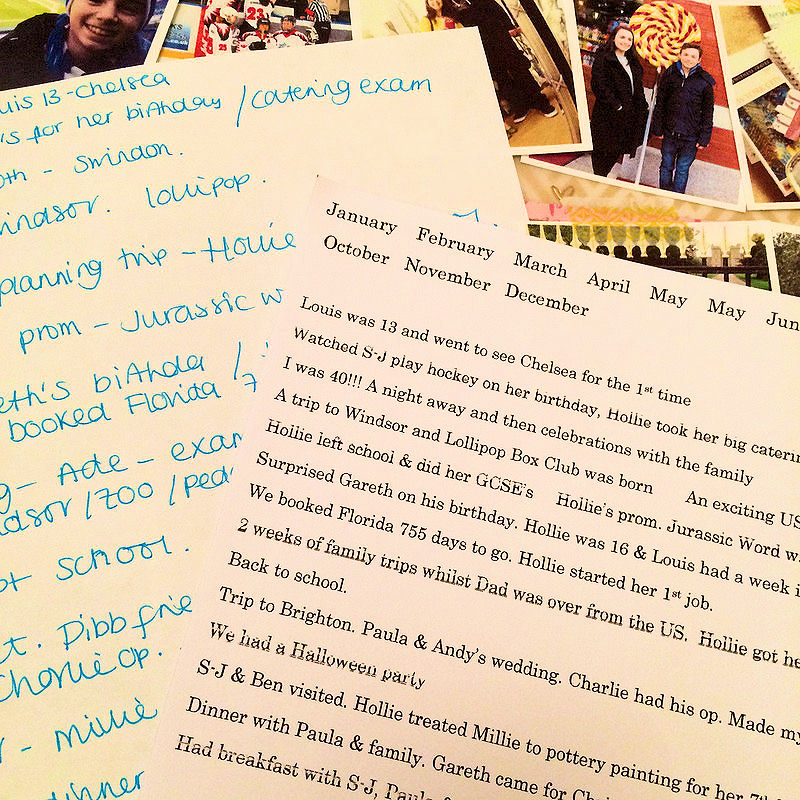 I took my notes that I’d written when I selected my photos and printed my journaling on my pc allowing space between each line for me to cut in to long strips.

Once the strips were trimmed and cut to pieces they were all stuck down on each photo.

To be able to fit the photos all on the page nicely they’ve all been stuck on at different angels so that they overlap. Every other photo was stuck on with 3d foam tape and the photo beneath with double sided sticky tape to give the LO a little extra depth. 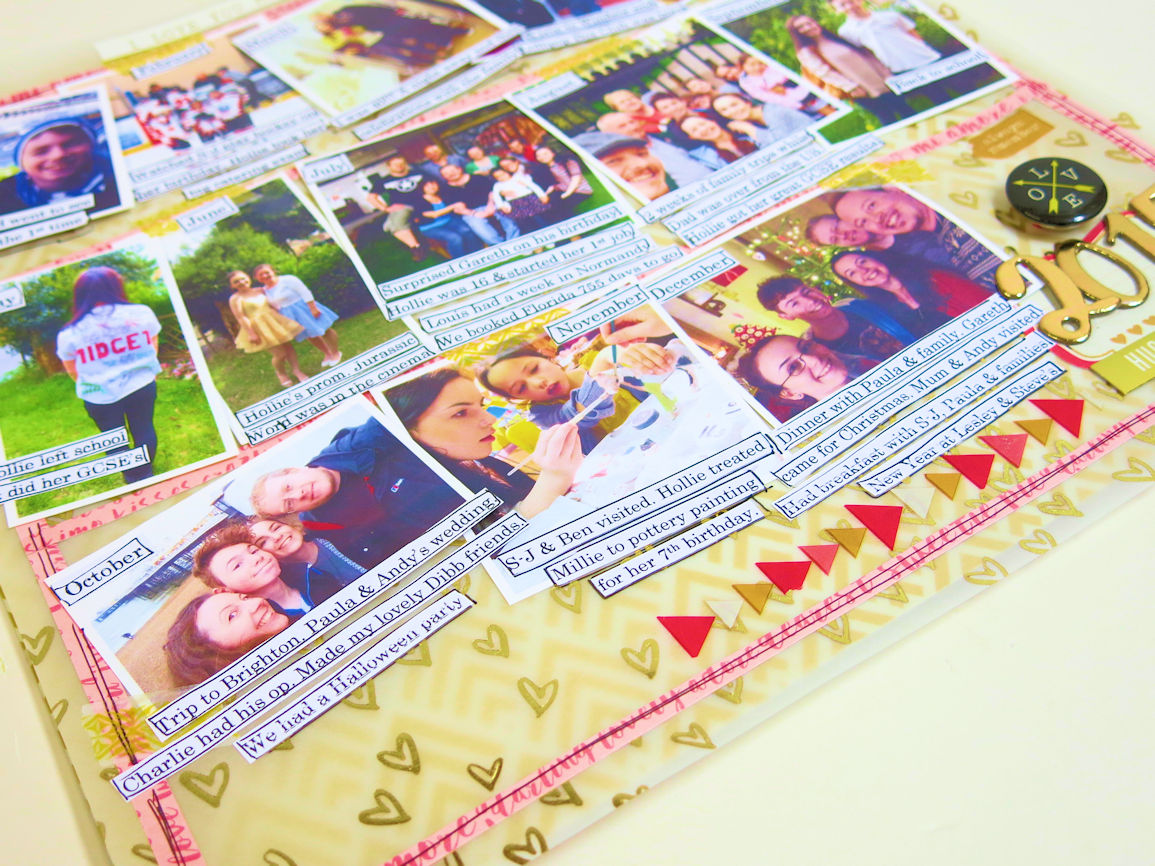 I took a black journaling pen and outlined all the journal strips. This helps them to stand out too. The My Minds Eye rub on, which is also a January addon, was a great adition to the LO. Leaving some space on the LO gives the feeling that I haven’t crammed as many photos on a page as I possibly could. It made the page look like it’s been created with thought and design in mind. 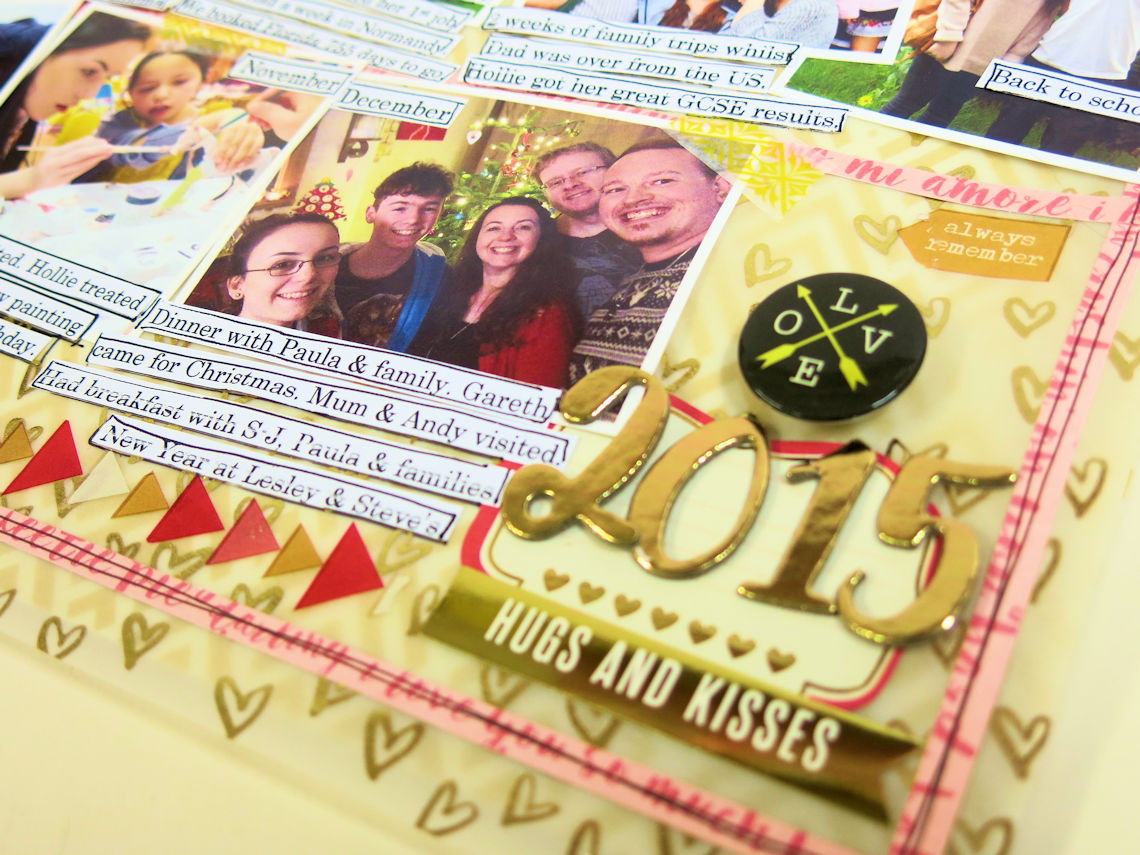 So that’s my 2015 review finished. It feels like a task the thought of making this but it does come together easier than you think and it’s such a nice feeling when you have actually made one.

Here is mine that I made for 2014 using a very different design. 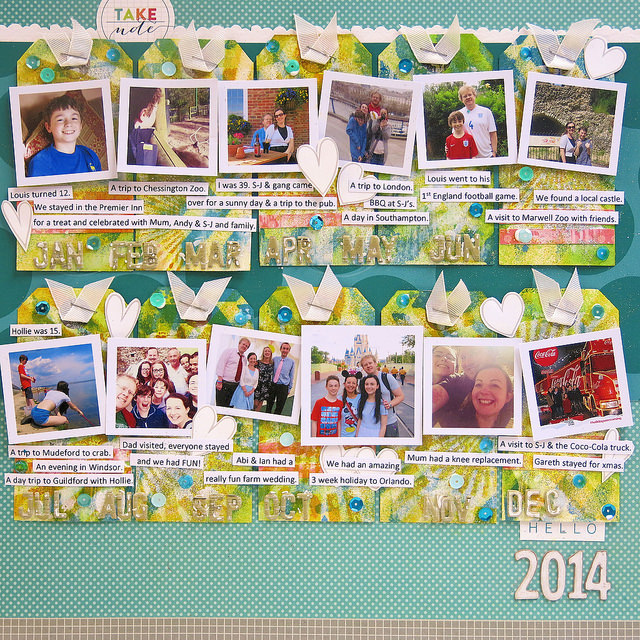 I used tags for the photos and again thick white borders which really catch the eye.

Just because you are using many photos, don’t let that put you off creating a pretty LO. You can still get creative and make an attractive page.

I hope this helps and if you also make an end of year review LO, don’t forget to come and show us on the message board. We’d love to see.