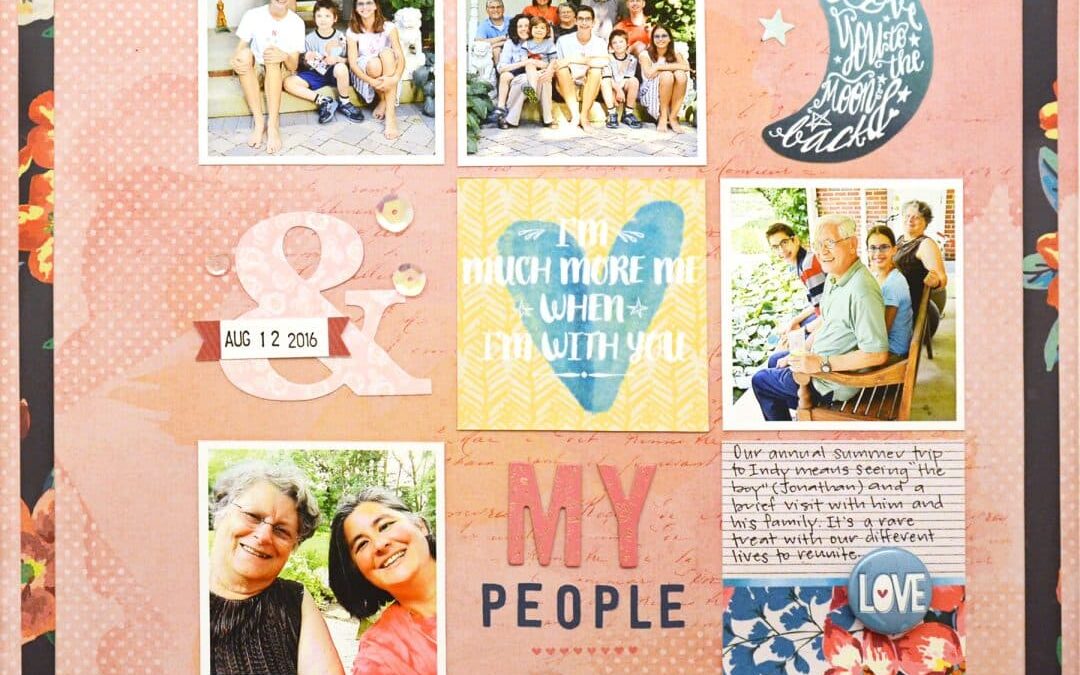 Hip To Be Square – January Sketch Challenge with a Twist

Hi Daisies! Suzanna here today to kick off the challenges for 2017! I hope your entry into 2017 was a good one! This month we are doing the sketch challenge a bit differently, hence the twist. It is good to change things up a bit, don’t you think? This month our “sketch” is a previously designed layout that the designers have interpreted as they would a sketch and essentially, scraplifted.

Here is the inspiration we all used, a layout created by Kylie using the December Cocoa Daisy kits; 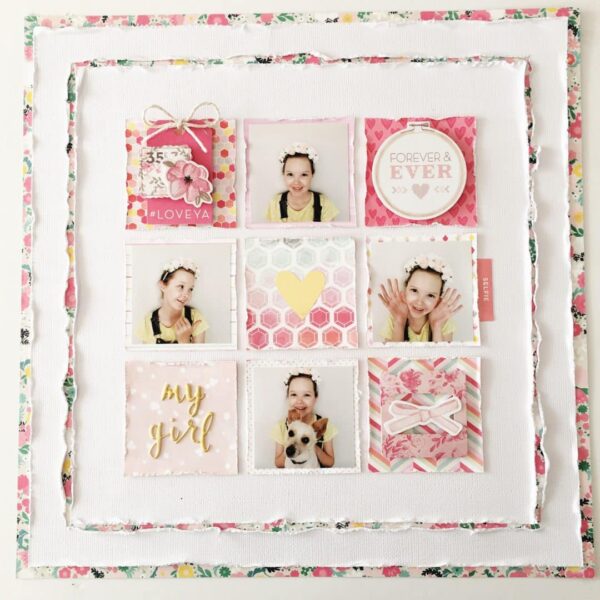 Three of use are pretty square while the one went “hip” and let her imagination run and stepped out of that square box a bit! Here’s what we came up with; 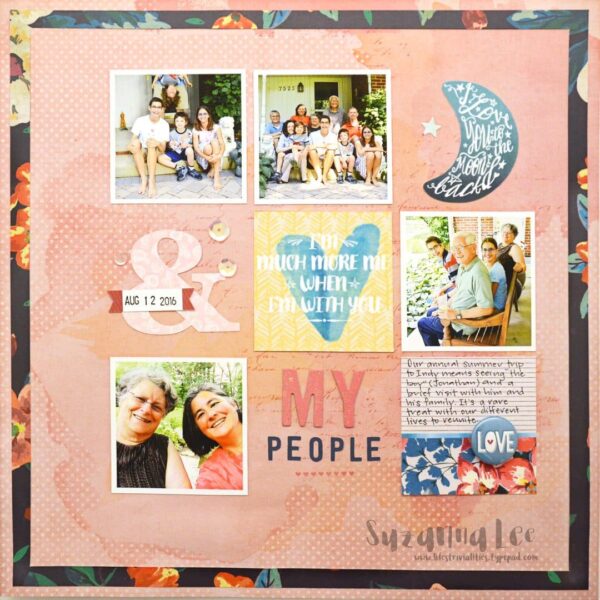 3 x 3 grid; check! Four pictures; check! Frame; check! I shifted my pictures around a tad thus necessitating a change of title placement as well. I also went with “visual” squares for three of the boxes. I toyed with patterned paper, machine stitching and outline, vellum and a number of other potential options but nixed them all. I liked the idea of the additional space on the page. Your eye draws a box around those spaces instead. 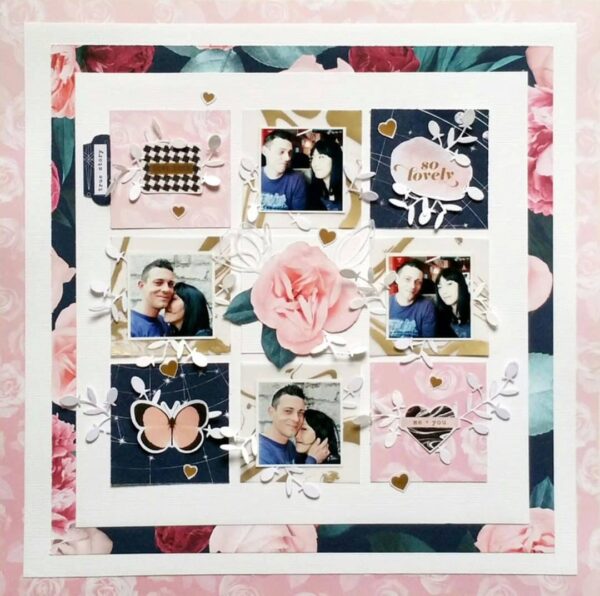 Marie’s dreamy layout kept all the same frames and grid layout that Kylie used but she used smaller pictures within the squares. I love how Marie uses tons of embellishments yet always keeps the focus of her layouts on the pictures. That darker/inner frame really captures your attention and balances the darker colors found within the layout. 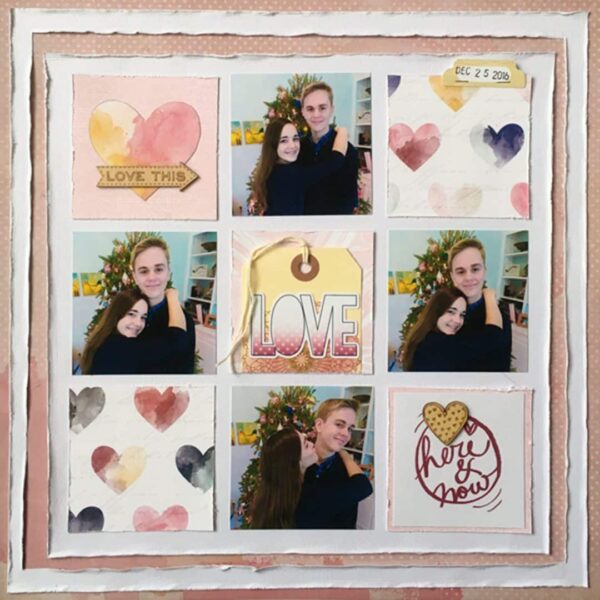 Kelly also keeps the frames and she tears the paper, as Kylie did. Kelly has shifted the title of her layout, “Love”, to the center of the page and she has left little white space, thus maximizing her use of the page. Such a sweet layout of Kelly’s kids on Christmas day! 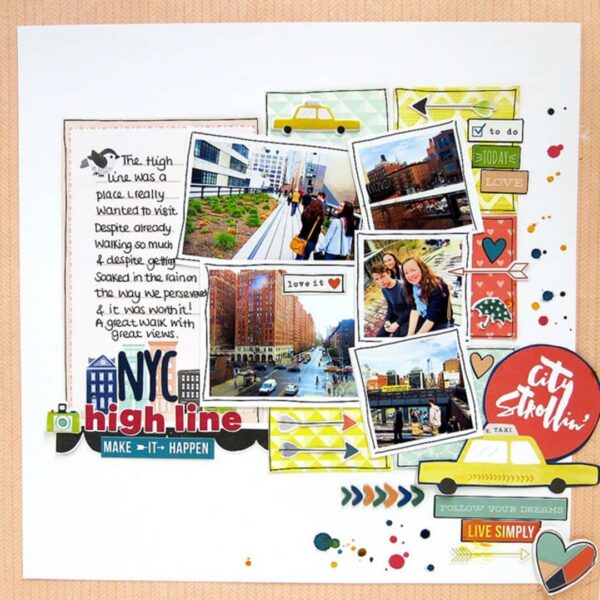 Lisa began her layout with a grid base and from there she moved outside the box! Lots of action and movement here in Lisa’s layout with her signature pops of yellow and doodling. While it isn’t an exact replica, you can see the resemblance between Kylie’s inspiration and Lisa’s finished product. 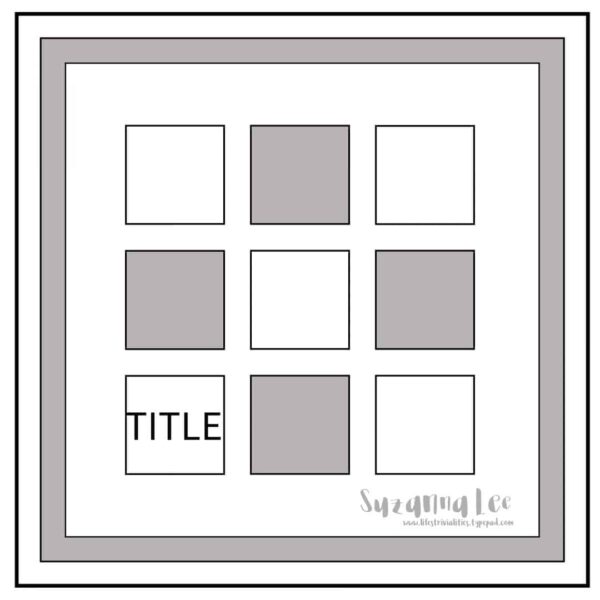 There will be a few who look at the scraplift layout and panic just a tad so I took liberties and not only interpreted Kylie’s layout as above, but also created a sketch for those of you who might be intimidated by the scraplift idea.

So, will you be hip like Lisa or bound by the square as the rest of us were? We would love to see your scraplift or sketch interpretation and have you play along with us. Now that the holiday craze and lack of time for creative endeavors is a thing of the past, we are hoping you have more time to challenge yourself and play along. Please share your creation on FaceBook, the Cocoa Daisy challenge message board or Instagram (please, if you post on Instagram, use the hashtag #Jan2017CDSketchChallenge) by evening EST January 18, 2017 so that I can post the winner the following day, January 19th, 2017. One randomly selected lucky participant will win $10 to spend in the Cocoa Daisy shop!

I can’t wait to see what you create!

Do you have a thing for Wint-O-Green Lifesavers too?
The Best of 2016