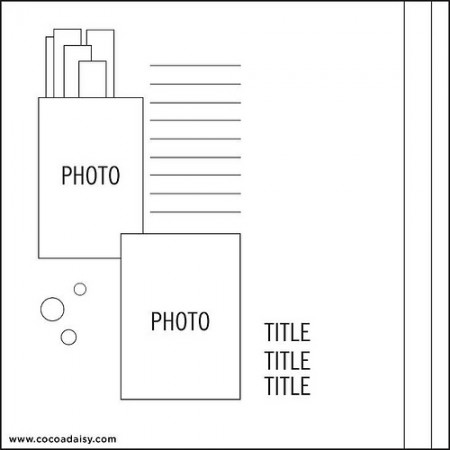 Hi there everyone! Suz here today with January’s sketch challenge and several fun takes on it from my fellow Daisy Designers Lisa (Funky Fairy), Mandie Pierce, Ashley Caulder,  Martha Bonneau, and Mandy Kay . {Can I just say it never ceases to amaze me how varied each design can be from one another and from the sketch itself. This month is no exception!}

Up first-the sketch itself:

I took a direct approach to the sketch and didn’t rotate it in any direction. As you can discern from the photo below, I did mix it up a bit though by placing my  stitched DITL “pocket” on the top right and I cut up one of the journaling cards into strips and tucked them away rather than journaling traditionally in that spot. I also moved the locale of the circles to the top left DITL card as well as to the middle of my title strip on the right side of my layout. And of course, I broke alllllll of the rules of scrapbooking by not having a single photo on this layout. (Really? Who made that rule up anyway. Cite me a source! JK.) 😉  The title was moved to the strip on the right side of the page as well.

Lisa (FunkyFairy) joined in on the fun with her fabulous take on the January sketch! I love that her interpretation involved clustering all of the sketch details together for a cohesive, layered effect. And it appeared to me that she rotated some elements of the sketch 90 degrees. For example, the  vertical strips on the right side of the sketch showed up horizontally along the bottom middle of her design (gold circle strips and tiny star strips) to act as a “shelving unit” as it were for showcasing her photo, embellishments, and journaling above. It was as if she placed every thing of importance atop these strips. Like little trophies and well loved trinkets. Top shelf goodness. Love it! 🙂 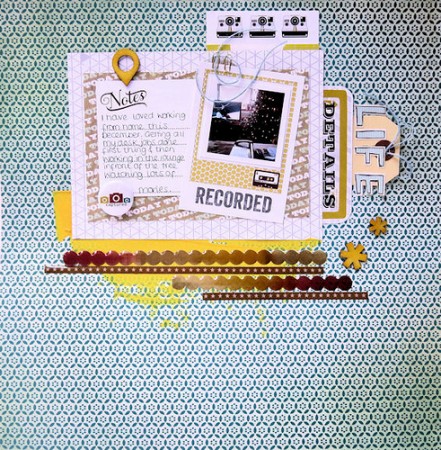 Martha stayed true to the sketch orientation and placed her two photos as shown in the sketch. She did move the title to the bottom left and creatively used the numbered arrow stamp set in place of the journaling. She also added the cute wood veneer asterisks to represent the circles from the sketch and snowflakes falling. Darling layout Martha! 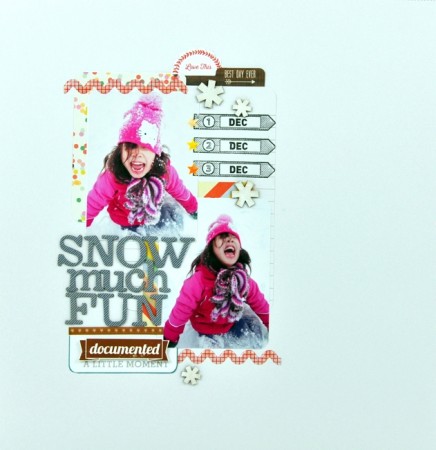 Mandie P extrapolated several design elements from the sketch to make it her own by keeping the photos in approximately the same position of the sketch but altering the position of her title work. She kept the circles from the sketch in the general vicinity of the original design with the placement of her candy/enamel dots (beneath her primary photo) as well as her typed journaling. Love that Mandie chose to print one photo in black and white and one in color. Such a nice contrast! Beautiful layout Mandie! 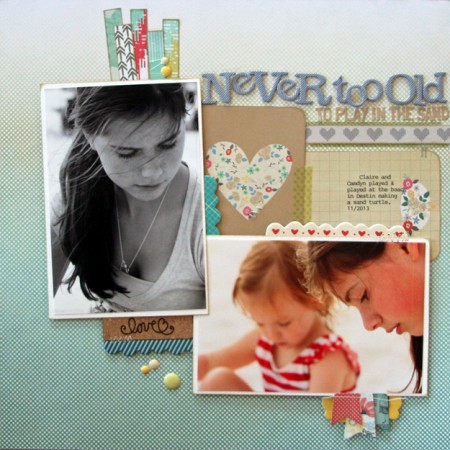 And Ashley created this adorable layout inspired  by the sketch. Here is what she had to say about her approach to it: “I moved the two photos so they were more in line with each other. I used the lines of the journaling as inspiration for placing the pieces of the cut-off strip and bumped the title over so the strips, journalling and title were all lined up down the page.”

Mandy Kay decided to rotate the design 90 degrees with her layout EXPLORERS OF THE FOREST: 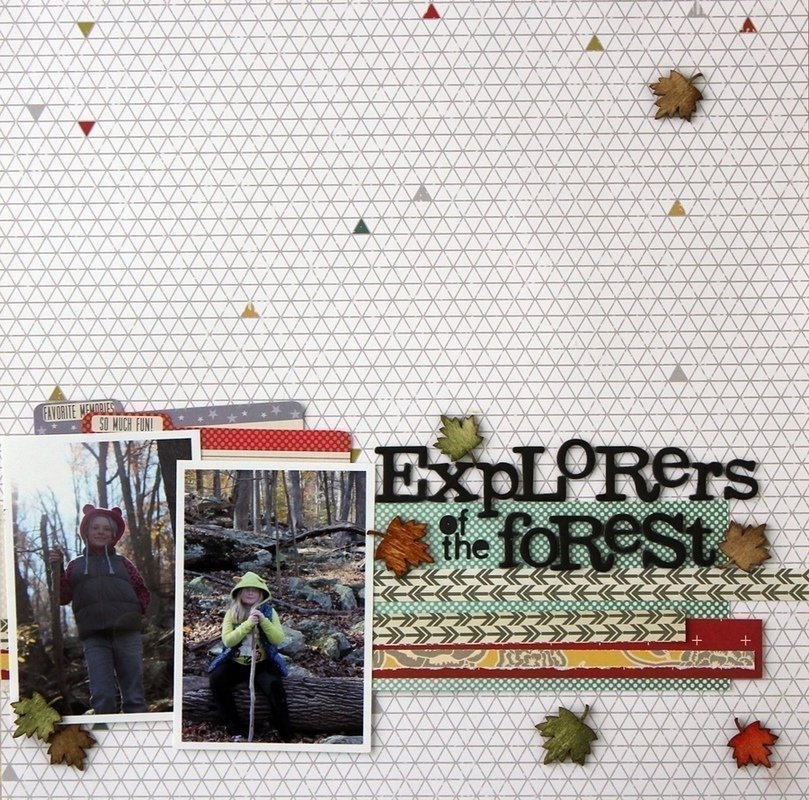 I love how her interpretation played out on paper! 🙂

So, are you ready to take on the New Year and the challenge and join us by playing along with this sketch? I’d love to see how you interpret the design and I bet you wouldn’t mind a chance at winning a little ole’ gift certificate to the Daisy Boutique to start the new year off in scrappy fun style. Yes?!  Here’s how: Enter for your chance to win $10  to the Cocoa Daisy Boutique by uploading your take on this sketch into the Member’s Gallery and linking us up back here in the comment section below. I will announce a winner back here on the 23rd of January (That’s a Thursday! )